Well, here we are! I finally did it. I sold the Genesis Coupe, and bought a project car. Lets see how this goes.

I also managed to make the longest possible title for this. You’re welcome.

We’re going to try somethings with both current projects (Mine, and Colton’s ’81 RX7) – I’m definitely going to be documenting mine in text and pictures, but we’re also going to try video as we work, as well. Do not expect quality (or family friendly) programming. I think we’ll be rating work on a “how many beers to do the job” level. Let the hilarity ensue.

As for me, I should introduce the project car, shouldn’t I?

I bought a very, very clean (but not perfect) 1987 Merkur XR4Ti. While it’s not EXACTLY a Ford Sierra Cosworth it’s close enough for me at this time.

But you want to SEE it, right?

Very briefly, I had it, and my old Genesis, in the driveway together: 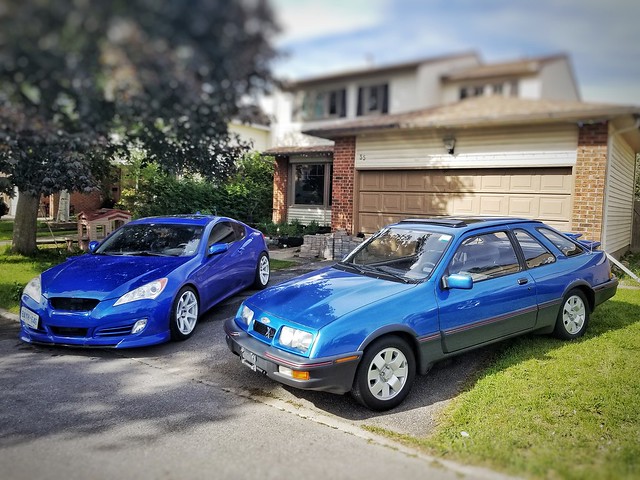 Well, here’s the gallery over at The Drunken Wrench’s Flickr (until we get better hosting set up). But here’s a selection of shots so you can get the idea. The Gallery will likely hold the minutia. 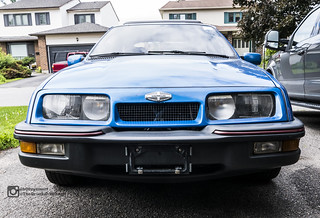 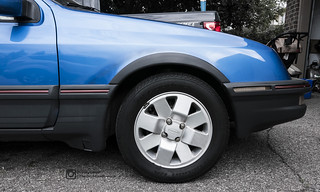 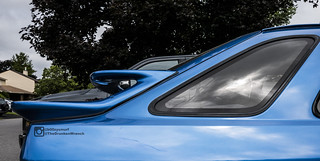 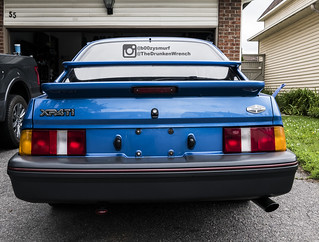 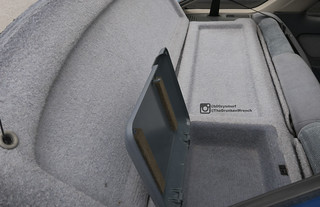 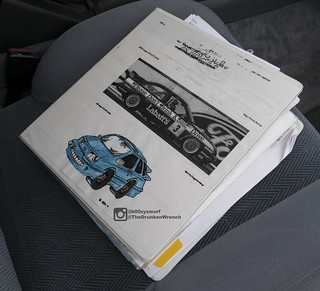 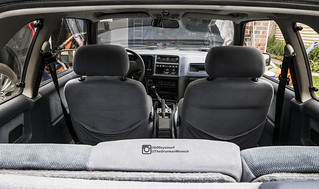 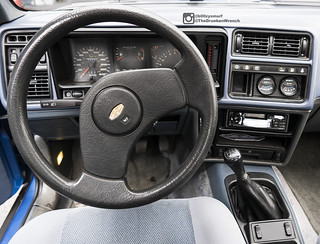 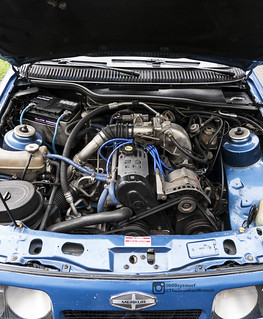 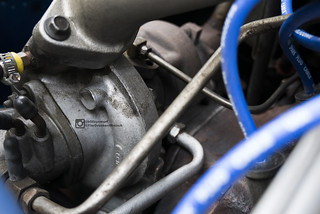 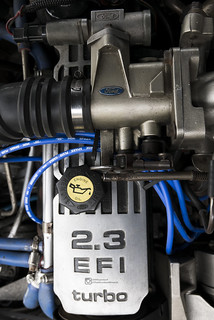 So, what’s on the agenda?

Well, first things first, I need to get it on the road. That means “safety”. There’s a couple of leaks that shouldn’t be a ton of trouble to deal with (in order of difficulty – oil leak, transmission leak, power steering leak – more on those individually later), and tires.

The oil leak appears to be due to a bad seal where the aftermarket oil pressure gauge is tapped in, so pulling it and adding some seal to the threads (teflon tape if it’s not a “hot” location, something else if it is) should do the job. 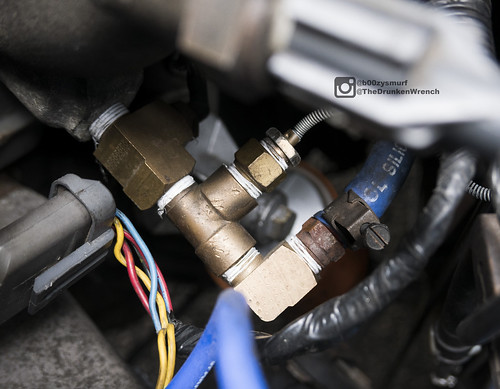 The Transmission leak appears to be from the speedometer cable at the transmission. That’s likely an o-ring. It’s a $7 o-ring, and the difficulty appears to be sourcing one locally (for a T5 transmission). I’m not paying $20 shipping from the US for a friggin’ o-ring in an envelope. That’s bullshit, CJPonyParts. I know damn well that shipping doesn’t cost that on that part.

The power steering will be more involved. It is the rack that’s leaking, on the passenger side. Upside, the previous owner had bought a seal kit, and is giving it to me. Note the tense on that. He had hoped to pick it up when he was at Carlisle at the end of May, but it wasn’t in in time. So, he’s mailing it to me when it arrives at his place. It’s not arrived yet, however, so I’m waiting on that. In terms of difficulty, this is an ”I’ve never done this before” job. So… that should be interesting. Stay tuned.

There’s also an exhaust leak which is questionably located: A generous safety would pass me anyway. A serious and involved one likely would not: 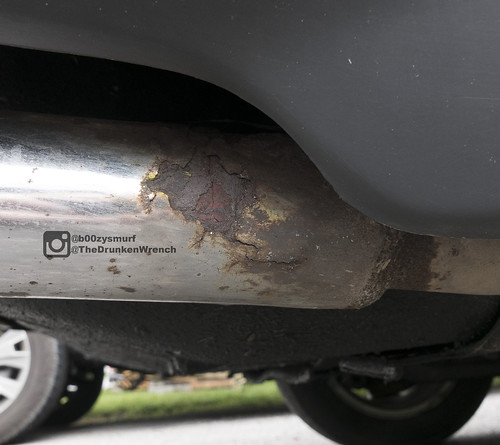 I’ve already ordered, and received, a new Driveshaft Center Support Bearing. This looks like it’s a “muscle” job, rather than being particularly difficult. I may need a new piece of pipe though…. 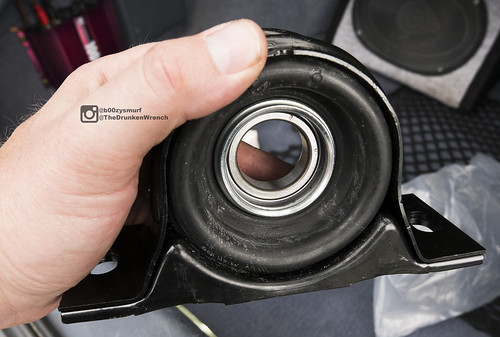 I had originally planned on putting OEM 195/60R15’s on, getting saftied, and running the car this summer. However, the summer is half gone, and I have zero time, so, I’ve decided that she’ll hit the road first thing in the spring. I may have her saftied in the fall, just before I start doing work on it, BUT, we’ll see what’ll happen.

Why don’t I just do the wheels and tires I want and giv’r? well:

That’s because there is NO ROOM for other wheel/tire combo’s. We actually had a hard time getting the straps for the trailer between the wheel/tire and strut. It’s really tight in there. So, while I want to go with a wider wheel/tire, it’s gotta wait for some suspension upgrades.

And I think I’ll talk about them separately, because I’m still learning about what’s involved there. Needless to say, like everything with the XR4Ti, it’s “non standard”. But, from what I’ve read, it’ll buy me a couple things.

A] much, much better handling
B] a bunch of room inside the front wheel-well to make room for a wider wheel and tire
C] slightly lower ride-height

So, that’s the basics of the new project. I’d really like it on the road this summer, but with a lot of family stuff going on, AND a major renovation happening late summer/early fall, AND work, and, you know, parenthood, it may not happen. That’d be a shame, but I don’t think I’ll hate it, either. I can live one summer without the toy, and just do a lot of photography.

I guess I should talk a little about “goals” for the car. It’s always important to have a plan, and mine is already evolving. First and foremost, I want to take care of it. It’s a hell of a survivor – effectively a one family car – and it’s got original paint, and just shy of 200,000km on it as I start to make it Mine. There’s some mild modifications already (the previous owner, Rick, had done the T5 transmission swap, and KYB struts/shocks). Otherwise, it’s pretty stock. It’s had some surface rust repaired, and there’s some dents. Those are likely to stay for a little while.

The goal is driving it though. I want it to be reliable and fun. As always, my preference is to sharp handling – I do love me some corners. I want to be able to go to the track for an afternoon, and not have issues. I want to be able to do a thousand kilometer roundtrip to various breweries, or the cottage. She’s gotta go to the Tail of the Dragon. I’m told that I have to go to Carlisle at some point for the Merkur meet-up. Autocross is DEFINITELY on the table.

In other words, I’m gonna put some miles on her, and they’re not all gonna be easy ones. But that’s ok.

What it means, though is that suspension is the first thing on my mind, tightening everything up that’s become loose over the last thirty two years, and that’s not limited to shocks, struts, and springs. Good rubber is a must have. I want to widen the stance/track of the car – again, for cornering stability. I would like to see a little more power, and there’s a path to that, too. There’s definitely a road-rally look in my head for the car.

And I’ve already gotten my first response to some parts help from <a href=http://www.mc2racing.comMC2Racing. The community surrounding the car is pretty interesting. I mean, I do have the Basterds to fall back on, but there’s two distinct, car-specific communities: The Merkur Club of America, and TurboFord (due to the shared drivetrain between the XR4Ti, Mustang SVO, and Thunderbird TurboCoupe.

So, I plan to learn a lot. I’m going to do a ton in the first year, and then ease into some additional work (like power) after that.