Well, holy! That was a WAAAAAAAAAY better race for me.

I’m getting ahead of myself, though.

We had a nearly three week break between Laguna Seca and Sunday night’s Nurburgring GP. Despite that, I got less practice time on the track than any track so far this year. That’s really surprising and I don’t really know how that happened. Oh. I do. Civilization VI got into my blood again. Also, a nineteen hour roadtrip to look at a potential project car.

As you can imagine, with that kind of lack of practice, I was somewhat worried. I’ve run this course a lot in other games – it’s a staple of the Forza franchise – but I’ve not run it with these cars, or in Assetto Corsa. So colour me surprised when I started turning out practice laps in the 1m50-1m51 range. Colour me even more surprised when I hopped on the server and found that the fast guys were running 1m45-1m48!

By the time I was done practice, I had a new personal best of 1m49.xxx. 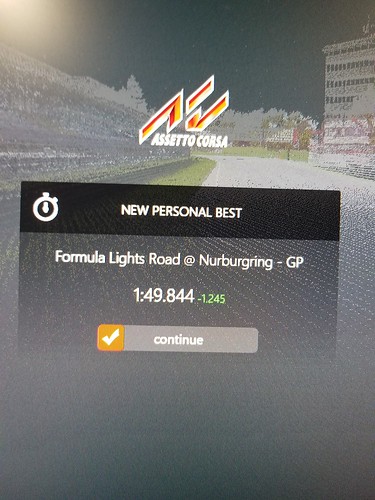 As always, it’s hosted by Simwerks, and we have colour commentary from The Greasy Fix. You can see the full race and commentary here on twitch.

Race time. Qualifying had gone reasonably – I don’t generally worry much about it. I know I’m not going to be running clean up front, and being able to judge the temperament into turn one is always beneficial for me. So, I qualified fourteenth, of twenty or so. Not bad. First, the video of the race, and then, the play-by-play.

The race was exciting. It was actually a really good race. Like, really good, with one or two shadows on it.

With a new set of headphones solving my voice/game sound/discord issues[1], and my position on the track, Race 1 began really well. I got a good jump on the mid-pack guys on green, and got a good line down the inside, as well. Came hard (heh heh) into turn one, and picked up twelfth place. There were some big incidents early on, up front, with the fast guys getting hard into it (and I need to rewatch that and see what happened) but it meant that some of us slower guys got into the top ten (yes, I did!) for a while.

The craziest was this one – someone got turned around on the first lap, and someone else came off a corner, went wide and… well, you can see the action in my rearview as they went head-to-head: 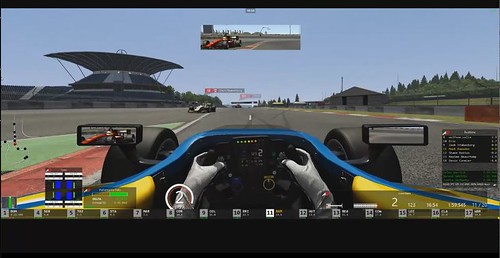 //embedr.flickr.com/assets/client-code.js
red car on the outside of me has nowhere to go 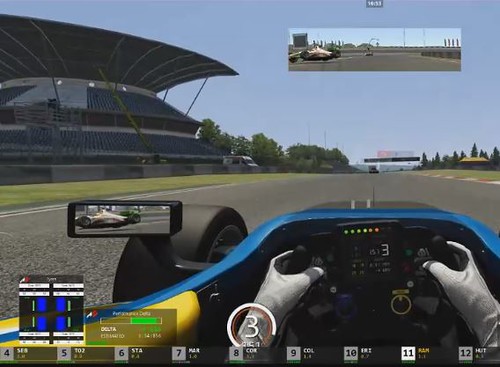 Things settled a bit for me then, and I got into a groove. I was chasing Maxime, Eric, and Dylan most of the race (or they were chasing me). Things got seriously dicey about half-way into the race when Eric spun heading into NGK Chicane. It all happened very quickly. I was following the two of them and Eric went deep on the inside, maybe a little too fast, but maybe not bad. 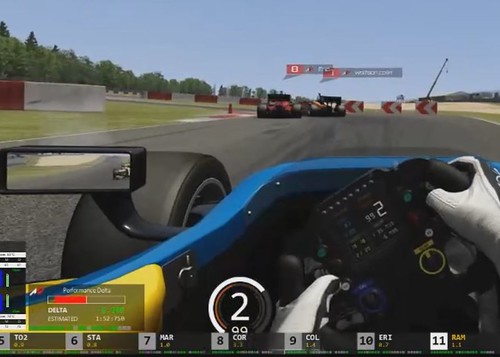 They came together, and spun, but because it’s a super slow corner (first or second gear, depending on your gearing and aggression) they didn’t fly off it. That’s bad for me, as I was only about forty feet behind them, waiting to see what happened on the exit, to see if I could pick up a better run out, and maybe get one of ‘em by cutting tight into Coca-Cola before the front straight. 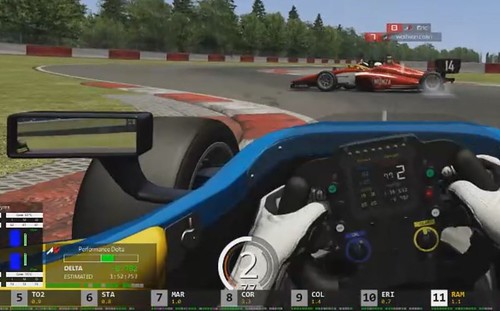 Unfortunately, Eric stopped in the middle of the corner. I tried to figure out in a couple of tenths of a second where he might end up, and I chose wrong – he backed into the space I expected to drive through. 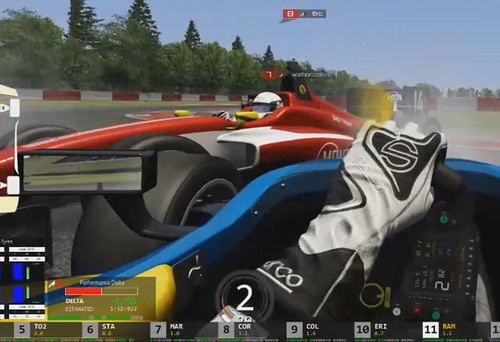 Fortunately, I was under 30km/h/15mph by then, so the impact wasn’t bad, but it put me off track, and trying to get out of the way of oncoming traffic. Also, no major damage (and I don’t think any from me to (Eric) either. I hope). I could feel some mild downforce loss from the front wing, but within two laps I had that sorted into the feel of the car.

Unfortunately, I lost a bunch of spots, and ended up back on the track, but in sixteenth. Fortunately again, I fought my way back up (mostly by being consistent, and letting other people make mistakes) gathered up Maxime again, and fought with both Eric, and Dylan to the end of the race.

I finished 13th, which is bloody fantastic. It did put me middle of the pack for the start of Race 2, and everyone had an idea what to expect going into the first corner.

I Lost a few spots early on, but some of those were to fast guys who’d had issues and started at the back. And, a couple of braking-too-early incidents for me. Fortunately, a couple of contacts and offs by other people left me still in thirteenth on the second lap, and fighting with Dylan.

In previous posts, I’ve noted that I’m too generous in traffic – I give spots away too easily, to prevent possible racing incidents. I got more aggressive today, and it paid off: See 32m13s in the race video, and my first fight with Dylan. We ran side-by-side through Dunlop-Kehre, and I actually got the line, and held it going into Michelin-Kurve.

Third lap, and another incident in the first corner put me into tenth (first incident I saw with the guy I discuss later on, too). At this point, I was chasing Maxime again (for 9th!) and coming up through Michelin, he spun, and FAST. Too fast, in fact,a nd then stopped immediately in the middle of the track. I clipped the back of him, ended up in the grass, but no major damage and I got back on the track and kept going. Lost a couple of spots again though – Zach and Colin managed to get by on the inside with some very smart driving.

There was at least one new player in the field this week. From watching the simwerks/greasy fix broadcast, and going back through mine, and talking to some of the guys, this one player had at LEAST four major incidents (he/she drove into the side of me at turn one, making a pass on an angle that would have cut the racing line in two places, even if braking from that speed was even possible. You can see it at (time) in the race video). Based on my (on racing line) entry position to the turn, it was physically impossible for the driver to do anything other than a] hit me or b] go off track and hit me. So, that’s what he did.

He spun in the same place the next lap, too. So, I got my position back. But, I’d have been some pissed if he’d put me out of the race.

I know at least one of the guys gave up a spot to this driver, simply because they didn’t want their race completely ruined by getting hit by someone. I’m mildly bitter that without this guy careening around, I MIGHT have placed tenth in the second race, which would have been my top finish so far. Beyond that, if they’re a dilettante, and don’t show up again (kinda hope they don’t) they’ve taken points from people who’re racing all year, and throwing a one-time wrench in the works. And yeah, it’s JUST a game, it really is. But we’re investing a ton of time in it, and effort, and working to get better at it while keeping things fun. And this is a significant detraction from that fun.

Thing is, he has no need to drive like that. He’s actually fast as fuck, and if he was slightly less aggressive, he’d probably be faster still, because he’d spend less time spinning, in the grass, or breaking his, and others, cars. Probably have more fun, too.

I should probably record from within assetto corsa, as well, but I haven’t really thought about that so far, just been concentrating on on twitch broadcast, and not embarrassing myself. 😀

The rest of the race was solid. I got back into a pack that was fighting with each other, and got into seriously well with Dylan again, and Eric, and Tayler.

Unfortunately “that player” “loiic”? was back (like I said, they’re really fast), and Dylan gave way to him (going into that first corner at speed, to avoid an incident. He (loiic) got me pretty fairly (when you watch it) going into Michellin – but I gave space because with 3 minutes left to go, I was looking at my best finish, and I’d have been pissed if someone diving up the inside for a questionable pass took me out. As a cyclist, I know damn well that “dead and right” is still dead.

Second last lap, and I got a place back (into 11th) because Marc-Andre had hardware problems with his Occulus, and dumped out of first all the way back through he pack. That’s a crap way to drop off, and seems to be a chronic problem with Occulus, hope they get that fixed with the next generation.

It looks like I’ve found something regarding saving video in game – Assetto Corsa offers a “replay” based on your ram size. Menu option max’s at 500meg, but apparently you can edit documents/assetto corsa/cfg/replay.ini and change “MAX_SIZE_MB” to 500+. I’d like to get the whole event, not just qualifying, or one race. Have to play with that. I should be able to give it at least a gig, and if that’ll give me an hour, hour and a quarter, that might do it, and my videos may get A LOT better. As may my editing skills[2].

Bit more play-by-play this post – let me know what you think. My video is getting better too, I think, so I’ll keep refining that, as well.

All in all, much, much better race day for me this weekend! Next week (we’re back to nearly weekly until the end of the season) is Paul Ricard. Difficulty rating: I’ve never run a lap in any game or simulator, here, ever. So. This should be fun. Sounds like I’m not the only one though. Which may make it even more fun.

See you next week!

[1] I know I’ve mentioned this in other posts, but I finally found out what the issue was. It’s a problem with the way Windows utilizes Bluetooth. It’s a known issue with Discord, and the fix turns out to be “don’t use Bluetooth”. That really means, use either a wired set of headphones, or a different wireless protocol. In my case, that meant I went out and got a 2.4ghz SteelSeries Arctis 7 headet. Problem solved.

[2] I’m learning Vegas Pro 15 which I picked up in a HumbleBundle a few months back.