I love Laguna Seca. There is something about this track that really does it for me. So, I was really, really looking forward to it, middle of the Simwerks schedule.

It did not go as planned.

My prequalifying/qualifying times were actually not bad. I was running down into the 1m15 second range. The “fast” guys were still well out of reach (I think Alex was turning a 1m10) But I was actually within distance of the fast mid-pack guys like Naresh.

I qualified seventeenth, but within 1.5 seconds of twelfth. pretty good. 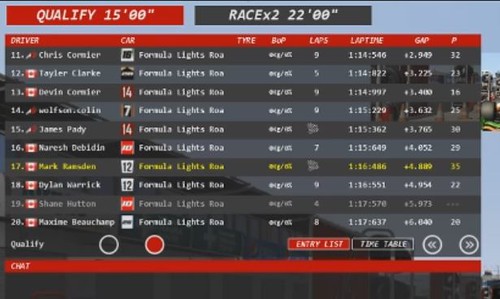 That did not last into the race. And it was 100% my own fault. Also, a bit of a stumble after we had a server issue.

I was actually doing reasonably well. The first race started well for me – I avoided a ton of issues in the first corner, and actually managed to come slow and tight through the corner, while everyone else went, well, everywhere. If you watch the video (time point) you can see where I slide through. Weirdly, I was aggressive but slow and it paid off – going into the second lap, I was in twelfth place. I got into tenth briefly!

Then the server glitched, cars jumped and desynced, and, well, this: 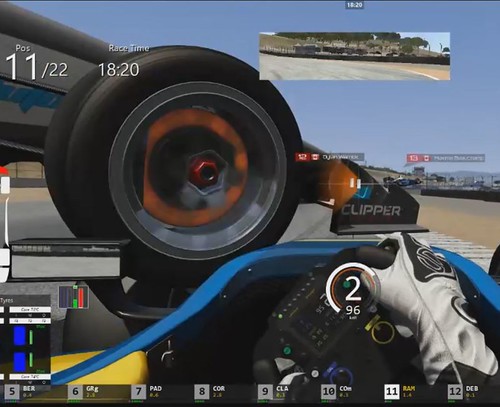 I came out of that hit with a completely destroyed suspension, and the inability to turn right.

So, we had a complete restart, and I lost my groove. I got frustrated, and spun a few times – cooked my tires doing it, too. Came out of that in 20th.

Race two wasn’t a ton better. I had some solid, consistent laps, but when I screwed it up, I REALLY screwed it up. I did have some fantastic back-and-forth with Dylan, when we were being lapped by the fast guys, and we would each use the fast guys to drag us past whoever was in front (I know I got him a few times that way, when he was off the racing line to obey blue flags, and he got me the same way).

Technically the same video, but skipped forward to start of Race 2

All in all, I did better, kept my composure, and tires, cooler in the second race. And it was fun. But I was expecting to do better, and it just didn’t happen, which is a shame. But, totally on me. And it got me for my effort. That was primarily due to a a couple of the fast guys dropping out mid-race (I think Seb had connection issues, and someone else had hardware problems, too). 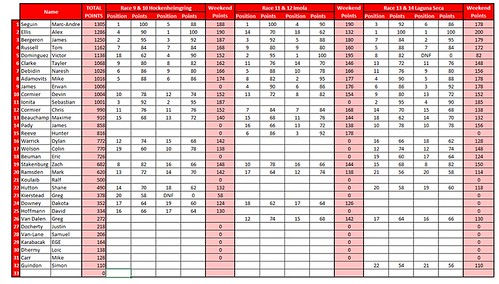 Next race is Nurburgring GP. That’s this coming Sunday[1]. Time to get practicing.

Oh, and as always, check out the Simwerks / Greasy Fix live stream from the race here, and Naresh’s own stream, and Mike’s stream at the links, if you want a fuller (faster) perspective.

[1] I got behind editing video and posting, so Nurburgring GP was LAST NIGHT. Expect the post in a couple days!