Well, I guess it’s time to say some words.

Last week, I put the genesis up for sale. 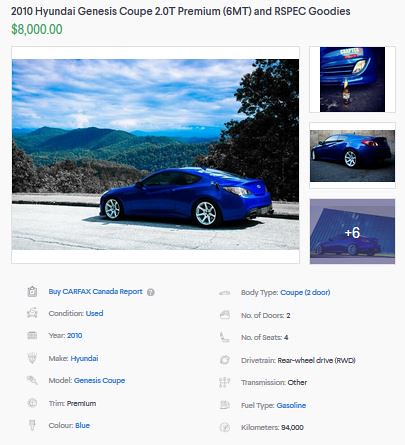 I’ve had some interest (one particular guy seems really solid, so thank you Eric for that referral), lots of people telling me my car is spectacular, it’s one of a kind, it’s beautiful, I take fantastic care of it… would I take 60% of asking price.

The question is, of course, WHY would I sell. And I’ve been keeping that down low.

And I’m still not sure. Because I drove 1450km roundtrip to London yesterday to see the potential project car. 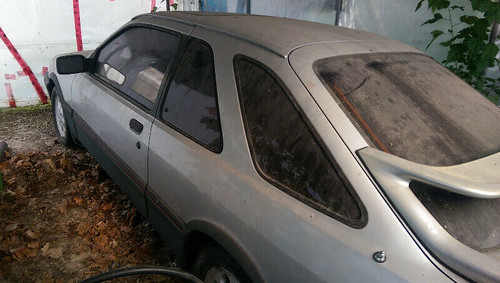 I’ve had a love of these for a long time. Grew up with ’em in British Touring Car, and Rally, as the Ford Sierra Cosworth. The North American version got, instead of the 2.8/2.9L Cologne V6, the Lima 2.3L Turbo. Yes. The block the Pinto had. (also, the Mustang SVO, and Thunderbird Turbo Coupe).

So when I went looking around for a project car, they made the list. And they’re fairly scare on the ground. Not collectable per se (not yet at least) but they were fairly rare.

Despite the previous chapters of the Project Car blogging, I hadn’t mentioned this one. Partly because I didn’t think it would come up as a viable option. I had big plans though, up to an 2.3T ecoboost swap.

So colour me surprised when one showed up, and for a reasonable price.

And I was brave enough to talk to the owner. I got his interest by telling him a story, and he insisted that we talk directly, so I gave him a call, and we chatted. It’s amazing what making something personal, rather than “wat’s UR lowst $$, bro?” does to get a sellers interest. Basically, what I said above here? What I said in my email. So, we chatted.

Yesterday (Friday), I took the day off work, and hit the road at 7am. Stopped in Brampton to pick up my in-house mechanic, and we continued to London. Got there around 230pm. Spent an hour or so with the owner, going over the car. It is, sadly, more neglected than he’d led me to believe. It’s definitely sat unregistered for at least five years, and I’d guess closer to seven.

Dammit. I forgot to grab the VIN so I could run the UVIP and see when it was last officially on the road. 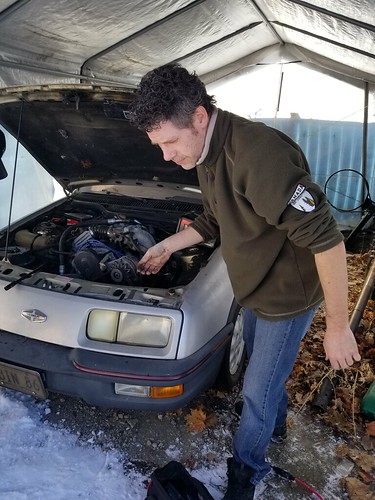 It took Jay most of that hour to get it running. It would crank and burp, but not catch. Eventually, after he pulled the plugs (which we sanded carbon off) it was evident that #3 cylinder wasn’t getting fuel. No idea of the cause, could be anything from an injector to PCM (so sayeth Jay).

I’m still really torn. I like the IDEA of this as a project car. It needs a ton of work – looks like the rear drums may be shot, and I don’t want drums anyway, so it needs a disc conversion. The tires are rotted, no doubt, which means new wheels. As cool as the 14″ phone-dial wheels are, there’s nothing in terms of performance tires at the 14″ size. Going to 16″ wheels gives me tire options, but probably means an upgrade to a five-lug hub.

It almost definitely needs a rad flush, and maybe new hoses and rad. As a matter of course, all the vacuum hoses need replacing. Sparkplugs and wires, likely distributor and rotor, too. Based on trying to get it to run, injectors, fuel rail, and maybe lines. Which means it’s probably worth just going to a MegaSquirt setup.

The transmission is a T9 5-speed. It’s not awesome. But it’s functional. Down the road, it’d be a T5, which is better, or even a T56, better still.

The body is… actually pretty solid. Floors are good, rockers are good, fenders have no rust in the wheel wells. The plastic wheel liners are literally collapsing on themselves – shattering they’re so brittle. There’s a dent on the rear passenger corner, but that might be dealable by banging it out from inside the trunk/hatch. The windshield is cracked, as is the dashboard. The weather strip on the hatch glass is also shot and would need replacing. Couldn’t check the taillights/spare for leaks, due to a massive speaker box taking up space in the back (which the car doesn’t come with). Frame appears to be solid too, as do the sub-frames. There’s a rust hole in the drivers side sill, and there’s surface rust on the roof, along the rain gutters. The paint, as you might guess, could use some “freshening”.

Suspension was reputedly refreshed completely (almost new everything) in the last five years. The springs were all I could see, but they were still clean and coated in plastic, so, I’m willing to believe that.

It’s got… potential. The engine, if it can run on all four cylinders, is apparently built (cam, porting, etc) by a reputable shop “a number of years ago”. Looking at the outside of the engine, I’d say “at least ten” and maybe closer to twenty. there’s no visible evidence that engine has been removed and opened up in the recent past. The turbo’s is similar, rebuilt by a reputable local turbo shop at some point in the past. The exhaust (2.5″ turbo back) is visibly clean, and new in the last two years or so. Nice stainless steel custom work.

But based on what I saw yesterday, his asking is between $500-$1500 too high, and his willingness to move is negligible. And I understand that. He’s owned the car most of its life, and still loves it, even though he doesn’t drive it. He may just keep it if he can’t get what he wants for it.

Still… I can see the potential in it:

I’m still thoroughly undecided. I’ve got my best option for buying the ‘coupe coming to see it tomorrow (Sunday) likely in the morning. I should probably decide around then what I’m going to do.

I HAVE SO MANY FEELINGS ABOUT THIS.