I had a lot of trepidation going into Imola. It’s a really fast track, that favours aggression… right up until it punishes it. It’s relatively short, with short lap times, too (something we’re going to see next week at Laguna Seca, as well): Us “slow” guys were running in the 1m37-41 range, and the fast guys were in the 1m32-35. 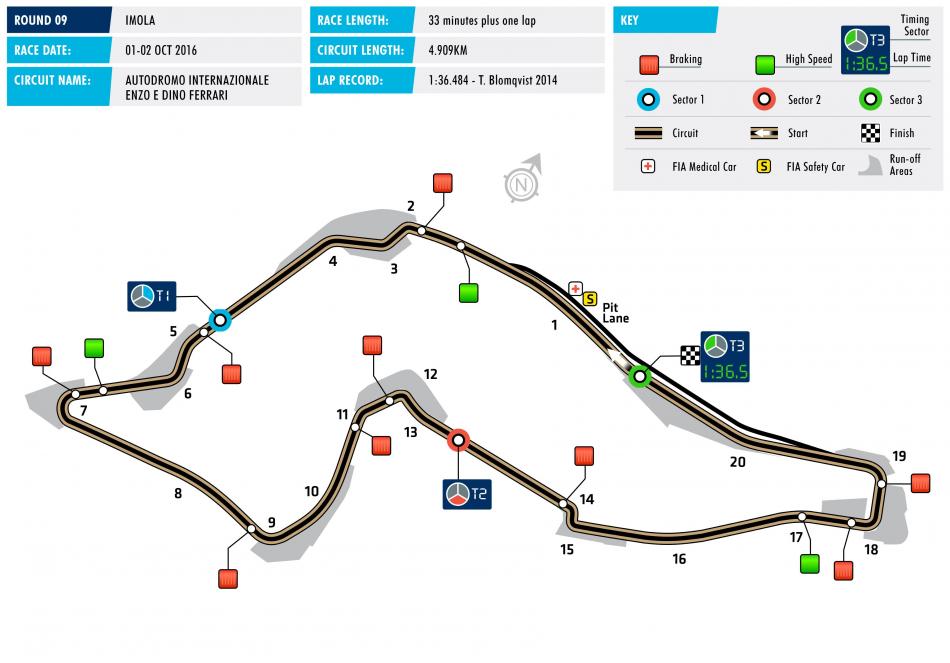 I was having audio issues. Like pretty much everyone, I run a headset for race day, rather than the speakers, so that I can be part of the discord chat. Because we run a manual rolling start after a formation lap, the green flat is verbal, from the guys at The Greasy Fix, as they start their commentary. Unfortunately, I had a situation that I couldn’t rectify by the time the race came a long – I could have discord in my headphones, but no game sound (so no engine, brakes, tire noise, or CrewChief helping me out) OR I could have all those things, but no voice chat. I gotta have game sound to drive, so… but that meant I couldn’t hear the shout for green/go, and had to watch for acceleration instead. So I got jumped at the start.

Upside was, that meant I was able to weave through the mess at the fourth and fifth corners, aka, Variante Villeneauve . And that was about as good as that particular race got. I spun a lot, I got frustrated, which meant I spun some more. I swear to god, again, TheGreasyFix ONLY puts the camera on me the moment I wipe out. I’ve no idea how they do that. 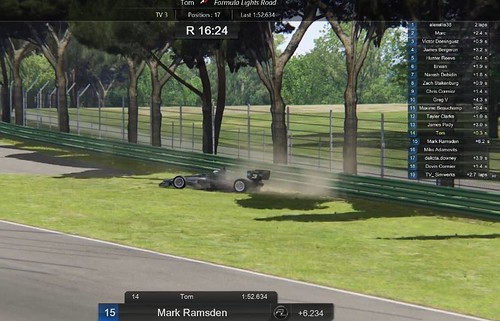 Don’t drive angry is a real thing. After all that, I didn’t finish the race last, but I lost position from starting, and finished 17th. Not great.

Race two, however, got… better. And very, very interesting.

Starting in 17th, I was basically back of the pack – I don’t know how series leader Alex ended up starting in last place, but he was right behind me. THAT’S NOT INTIMIDATING AT ALL. Again, starting on visual cues only, NOT the verbal green, green, green over Discord. And again, a mess at the start. But something happened.

I got calm. Collected. And consistent. Notice I didn’t say fast. But consistency counts, and I know I keep saying that. But it really does. A single fast lap does nothing for you, if you spin out and lose twenty seconds on every other lap. As I know from the previous race. So, there were issues at the first corner again (no surprise, it’s a 3rd gear switchback with big curbs, at the end of a 6th gear run, with heavy braking). And I … weaved my way through them. I picked up a few spots, and was in [place]. At this point, I was running with the usual suspects – Maxime, James, couple of others, and we were all over each other. I lost a spot, someone spun, and I gained one or two. There was some heavy fighting up front (I’ve not watched the race yet, so I don’t know what was going on, but we kept coming upon two or three from the fast crew spun out and trying to rejoin). Maxime spun, and I got past him. At this point, I was in tenth. TENTH???? WHAT????

It didn’t last long. I got passed by the two front runners who’d spun giving up 11th and 10th spots to us slower guys, and I settled into a pretty comfortable pace in 12th. I think I ran about five consecutive laps not only quick (for me, especially on race pace) but within three-quarters of a second of each lap. A string of 1m39.xxx laps. Considering I’d qualified “fast” at 1m38.452? That’s damn good pace

With eleven minutes left in the race, I got a “ten minutes of fuel remaining” warning.

Lets go back to the pit, back in time, to between the two races. See, I’d finished the previous race with nearly ten minutes fuel left in the tank. And, I’d been having an issue where, when I have my full race fuel onboard (26L) the car is REALLY darty for the first two laps. As I had so much fuel left after the first race, I reduced my load to 21L – I hoped that’d stave off some of the dartiness and unpredictability, but still leave me with plenty of fuel. And it would have. Had I run the same race in race 2 as I did in race 1. However, comparing the two races, I was a golden god of speed in race 2. And you know what speed costs? Fuel.

So here I am. 4 minutes left to race. Low fuel coming on. A pack of guys who are, ostensibly, in my speed bracket between six and ten seconds behind me. And probably three laps to go.

Fuck it. Hammer down.

I got another full lap in before my fuel situation went yellow. I started coasting a little more, but not too much, and turned a still respectable 1m41.xxx The pack (Maxime and Tayler, I think) of two still about six seconds behind me. I coasted hard for another full lap, turning a 1m47 as my fuel went orange. The pack, now four seconds behind me.

Last lap – the guys fell back slightly, and my fuel went red – less than 2L to go with a full lap to go. Suddenly, going into Variante Alta, it became obvious that if I kept peddling it to save gas, I’d be passed. I couldn’t hold guys up blocking at a gear slower than them. So, coming out of the hairpin, I stood on the gas and decided if I was going down, it was coasting, and out of gas, there were only three corners left before the front straight and the end of the race.

Mowed the lawn, and both Maxime and Tayler went past me, and I dropped to 14th. I hammered down the last few corners, and that was the race.

If I’d have played my fuel strategy better, I’d have run full beans for the entire race. I’d probably have averaged a 1m41 lap time, which would have been awesome. I’d have finished 12th.

But I didn’t. And Maxime and Tayler played it better than me. And they got me. And it shows in the standings! 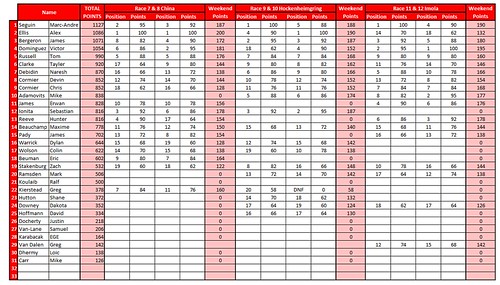 It was a brilliant race though. Most fun I’ve had yet this season. And what I’m finding is that I’m consistently on pace. Not fast guys pace, but when I’m on, I’m ON. And it’s really good. I’m more confident, and I’m learning what the car can do.

Sounds weird eh? It’s JUST a simulator. A video game. But everything, everything I’m doing is about carcraft, and racecraft. It’s really good. I also really want an Occulus set-up, but my GTX965m videocard just hasn’t got the juice to support it.

Oh, and as always, here’s the SimWerks Twitch Feed with commentary by TheGreasyFix™. Always worth a watch, if you get tired of watching from my cockpit. As the other guys post their own stream recordings, I’ll probably add them into this post, too.

Oh, additional race-views (much faster than I, honestly)