Here we are, it’s Friday, and it’s time for your Simwerks race recap.

If you remember the last post, the race this week was Hockenheim. It’s a fast track – dunno what average speed ended up being, but laps appeared to average around 1m30. We ran a full field again, which is both awesome and terrifying. I’d set a pre-qualifying time of 1m31.5ish, and the fast guys were running pretty consistent 1m27. So, four seconds a lap difference. And while I am pretty consistent at that 1m32 range, the top eight guys or so are consistent… but about five seconds a lap faster.

Throw a couple of racing incidents in there and …. Well, you’ve got a recipe for a lapping situation.

I qualified 17th. Not bad. Not great. The field was 22 cars, I believe, so… business as usual. From what I’m starting to see watching the fast guys replays on twitch, I’m doing all the right things – I’m in the right gear, I’m actually carrying the right speed through most of the corners. I was worried that I was off by a lot, but I didn’t seem to be, despite the disparity in times. What I am is simply not as brave as them. They’re diving into corners later and harder, and are better at judging hard braking to maintain their speed. That’s 100% of five seconds a lap difference. It’s impressive. And, as I said, they’re consistent at it.

The exception: Turn 1 at Hockenheim. I could not find a groove on that, and was carrying about 185km/h through it, consistently, in fourth gear. Comparatively, Naresh was running about 220km/h through it in fifth gear, which is blindingly quick. I just couldn’t find a line and any time I tried to go faster than a brake dab and fourth gear, I spun out. I’ll probably run the track some more just to see what I can do, even though that race is done for the season.

Starting fifteenth, we set up for the rolling start. Bit of a shit show, with contact and spin-outs on the formation lap, so we had to run a second formation lap. Once we got it, the start was quick and I actually made up a spot. I was clear and mid-corner with no incidents, and then someone (and I don’t know who, but it was an orange-brown/white car) apparently tried to win the race on the first corner. From 20th. So, at that point, I was last. Unlike Naresh, the gentleman, at Bathurst, this driver didn’t wait around to give the spot back.

However, my consistency came into play here, and I slowly gained ground as people fought with each other, and pushed too hard. As always, being able to do a 1m28 lap is great. If you bookend it with 1m40 because you spin out trying to get there everytime, I’m gonna be faster with three 1m32’s. Not to say I didn’t spin a couple times, I did, but for the mostpart, my laps were consistent 1m32-33.

And it paid off. I ended up finishing in twelfth. Considering what the top ten is in terms of speed, I was pretty happy with that!

Started twelfth, due to my finish in the first race. Cleaner formation lap, but again, early in the first lap, punted hard (might have been Chris C, he was apologizing to Dylan, but I was chasing Dylan, so…. Yeah). Definitely much more of a racing incident than a ridiculous dive through the pack. Unfortunately, it still left me at the back again and playing catch up. I really would like to have one clean race this season.

The last few laps, as I pulled my way back up through the field, got…. Interesting. I got frustrated with a couple of spins, and got my rear tires in bad shape, which meant I spun more because I was carrying too much speed for my traction and made me more frustrated. Beyond that, at about lap fourteen, the lapping started. You were wondering if I was gonna get back to that, eh?

The whole pack of front runners caught me and it is hella nerve-wracking to be a] trying to maintain race pace, because you’re only six seconds behind the guy (maxime) in front of you, and only ten seconds ahead of the guy behind you (Shane) both of whom can turn out 1m31 and better on a moments notice, b] still trying to conserve your tires but c] trying to conserve your tires AND pace while you’re off the racing line because d] you’re obeying the blue-flags and letting fast, lapping traffic go past you. Marc-Andre first, a flurry of others, and then… over.

I finished 14th (I mentioned that?) and just barely a lap down: 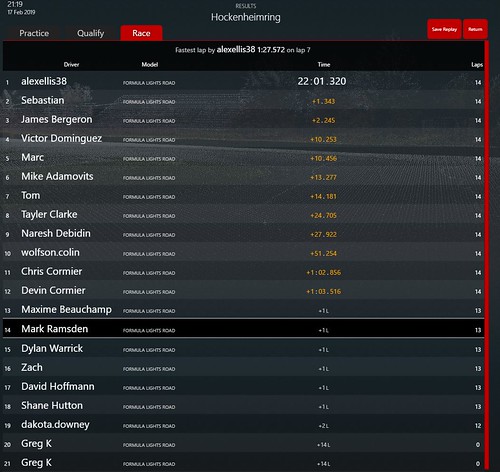 So, the standings? Well, I’ve missed a couple of races, but they look like this now: 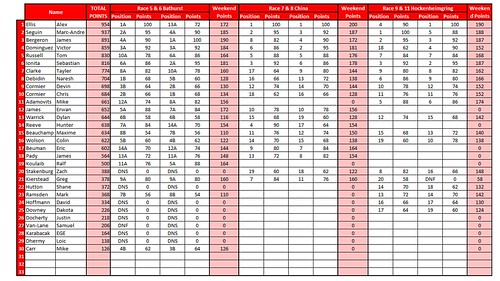 next up, Imola. Rather than blow my wad in this post, I’ll put the track map on the next post. But right now, I’m running a low 1m39, and the fast guys are running 1m32-34. So, I’m realistically about 5 seconds off the pace. That’s not terrible, and I can definitely see a 1m38. I’d be very surprised if I get a 1m37 though.