It was a bloodbath.

That’s not entirely true. There were a couple of major incidents in Group A. If you want to watch their practice, Qualifying, and both races, the link is here:

It would also be worth checking out James, and Mike, both in Group A, both very quick, and both broadcasting their own practice and race from the cockpit.

As for me, I was solidly Group B again. I’m not complaining. When I started practicing Bathurst, I was turning 2m08.xxx laps. I was aiming solidly for 2m04.xxx.

By the time raceday came around, I was turning a personal best of 1m59.717, a pre-qualifying best of 1m59.749, and consistent, consecutive laps in the 2m00.xxx range. I was pretty happy with that, despite the blindingly fast Group A guys turning (no shit) 1m52.2 kind of laps.

That was when it all went to hell.

I do not have enough practice in traffic. I’ve had a ton of practice. On open tracks where I’m the only car there, or close enough that it makes no difference. Even with the aid of CrewChief and HeliCorsa plugins, I’m too nervous in traffic, and it costs me positions.

And then, in race 2 of Group B, disaster. I took a bump from Naresh on the second lap, at the top of the mountain coming through McPhillamy Park at 220ish km/h. If you want to watch it, it’s here, at 1h40m or so (I think it’s actually around 1h42m ish, but watch from 1h40). Actually, the second race starts at 1h35m on the Simwerks Twitch feed, here:

It actually doesn’t look like that big a hit, but I tell you, from inside, it was like being on the teacups at Canada’s Wonderland.

Also, not mad. If you watched the clip, I’d tapped the wall on the way up the hill, and I was somewhat shaken and trying to get my groove back. I was a little off line, and got a little on the grass, too. With the pace that Naresh was keeping (nearly Group A speeds) I’m not stunned something happened. Hey, that’s racing.

That set me about 60 seconds back. Due to various incidents and slow-downs, I got up to about 35 seconds behind, but I was still well behind. I ran solid and consistent from then on, but, definitely not enough. That said, I learned a ton again, and I’m getting faster and smoother. How much? What I didn’t realize was that, in my chase to catch up, I set yet another personal best. It’s all about nibbling away at your time, going a little faster and finding a little more control at speed, and I’m doing that.

Next Sunday, that’s the Chinese GP. This is a fast track, and some seriously difficult decreasing radius turns. It’s going to take some practice this week, for sure. And we’re racing the next four consecutive Sundays, so I’m going to get some practice. unfortunately, so’s everyone else.

Here’s the standings so far: 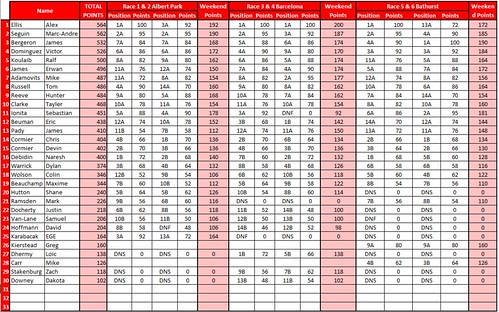