Well, that’s the first race down. How’d it go? If you want, you can watch it here:

My feelings on it?

So, I don’t know how to start a race. Sounds dumb, but it’s true – an online start is… I dunno. And there’s no instruction. So, I black flagged both races. Oh, god. How embarrassing. First race, drive-through penalty, second race, bumped to pit row with a ten second penalty. Dammit. Gotta work on that.

First race, I made it far enough to get into the second race – 7th. Second race?

Oh, Second race was where the fun was. Like I said, I started ten seconds behind, but that actually helped me a little. I say a little, as I can’t get all the way to the front like that without a major incident up-front, slowing things down. BUT. With some issues mid-pack, I got into a couple good fights – Maxime, I chased that dude for three full laps, both of us making the odd mistake, stretching back out and pulling back together again. I finally got him through Waite, Hill, and into Ascari. I was fully sweating by the end of it.

But that wasn’t the end of it. I picked up another spot, and got up to .. fifth? I think? That’s also something that doesn’t translate well to the drivers, in car. I’ve not found a HUD layout that I like that doesn’t obscure my track view.

One thing I’m finding is that I’m not consistent through the last three corners (Stewart, Senna, Prost). I’m not bad as I come out of Senna in second gear, and my run through Prost tends to be smooth but not as fast as it could be. But I have real problems with Stewart – I can’t stop tapping the brakes going into Stewart, and it hurts me in terms of speed. I’m guessing I’m losing at least a second or two just there.

Which is where the problem happened. On the last lap, no less – All of a sudden, I thought Maxime was back on me, but it wasn’t Maxime, it was James. Out of nowhere, James was all over my spoiler. And by the time we were in Prost (where I’m a little slow) he was on my spoiler. Literally. I got a little bump from him. And by the time we hit the finish line, we were both coasting (out of gas, I think!) and he JUST carried more speed than me. It was literally a photo-finish, and if I can find it in the twitch stream, I’ll get a screen grab of it, because it was awesome. In hindsight, I should have saved the replay from my own game.

The guys at SimWerks and TheGreasyFix did a great job broadcasting and colour commentary, but there are some issues that are inherent in the way Assetto Corsa does “viewing”. There may be some fixes for that, I dunno what they can do in terms of additional software. iRacing does do it, but I’m guessing they have something proprietary, and expensive. I know the major complaint with the streaming was the jump-skip between cars, to try to follow battles, and that’s 100% NOT on the guys doing it, it’s an issue (not a flaw, as the game wasn’t designed with broadcast, TV-style, in mind) with the game and current usage. But, there must be some work arounds out there. As I’m not competing for first, maybe I can find something for ‘em.

What’s next? Well, in a few days (a week, specifically), it’s the Barcelona GP track. This is again, a track I don’t know particularly well. I have run it on Forza, but it’s not one I gravitate to (if you’re a Forza person, it’s the Circuit de Catalunya, and was available in ForzaMotorsports 3, and 6. It’s a pretty cool track, honestly, but it’s fast. Very fast. There’s a reason it’s a Formula 1 stop.

Which may play to me – it’s a wider track too, so I’ll have a bit more room to play with, and I think it’s more forgiving that Albert Park was. I won’t know until I get a chance to turn some laps, however, and that’s on the agenda this week, now that the first race is out of the way.

This was actually my first “miss” for the season: I’m did a late Christmas at my folks place, and was travelling (very slowly, behind a snowplow, for six hours) home during qualifying/pre-qualifying, By the time race time came around, I was exhausted. I did watch the guys run though! It’s a shame, but it’s a long season. If you wanna see how it played out? here you go.

This Sunday, however, is Bathurst. Which may well be renamed “bloodbath” by the time we’re done. I’ve gotten my times down from an initial 2m17s or so. I was, originally, aiming for 2m04, I thought that was going to be good, but my current pre-qualifying time is 2m00.165, and my best time (private session) was 1m59.717 WHOOO! BROKE THAT 2M BARRIER. 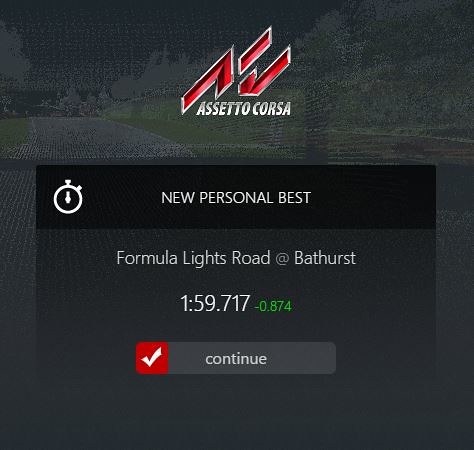 The ‘bad’ news is that the fast guys are lapping at 1m53s-ish. I’m not that fast. The good news is that within the b-group (where I assume I’ll be), I’m pretty competitive, and should run middle of the pack. I’m running consistent 2m01 laps now, and without problems that should let me crawl up the rankings.

Baring problems. And if you know Bathurst, it’s gonna be problem-y. The walls going up the hill, and back down it, are going to be killer. Anyone gets turned around in there is going to cause massive traffic problems. My primary goal is, as with the first race, not to be the guy who causes the problems.

Still, I’ve said it before, and I’ll say it again. It’s a long season.

And speaking of that long season, I forgot to post the schedule:

Keep in mind, you can register anytime if you’re interested in joining in, and there are prizes and raffles (and good ones too. Like a Thrustmaster wheel/pedals rig).

That’s it for now.