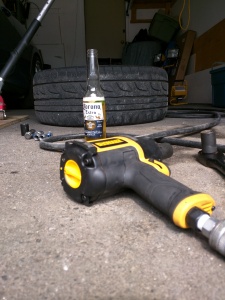 “I’d warned Creighton about the Hayabusa Effect prior to his Hellcat purchase. It’s a phrase I coined many years ago after meeting a fellow who owned a turbocharged Suzuki Hayabusa… … And every turbo-Busa owner I’ve ever met tells me exactly the same thing: “At first, the Hayabusa seemed crazy fast. But I got used to it, and I wanted something that gave me the same thrill the ‘Busa did when I first got it.” … … It’s no surprise that Creighton has quickly adapted to owning a 707-horsepower daily driver. But it’s also worth nothing that “adapted to” doesn’t necessarily mean “became highly competent at operating.”

Pretty much nothing, other than a clapped out ’98 Tercel, is “slow” these days. The Elantra (an economy sedan) can be kitted out for under $30,000 to rip 0-100km/h in about seven seconds (6.4 is the official claim with a manual), and quarter mile in under 15. A base (manual transmission) Honda Civic does much the same numbers.

Must be an outlier, right?

Keep in mind, in adjusted dollars, these are all twice the cost of the Elantra Sport, or GT86.

We’re spoiled as hell, but the Hyabusa effect IS real. And, lets face it, an awful lot of people have the attention span of gnats, too, which doesn’t help.

~Mark
BTW, this is a lead in to a larger piece on the Golden Age of Horsepower(tm) that I’ve fooled around with a few times over the years. An expanded version will come … eventually.